If God Made Dogs, Why Would People Harm Them?

I’m not a religious person, but I recently discovered this video, titled “God Made a Dog,” that’s been circulating on the Internet recently.
It’s a heartwarming video that outlines all the ways that dogs provide comfort, love, and companionship to people, without asking anything in return.  Whether or not you believe that God, or any other spiritual being “made” dogs, or that dogs evolved via natural selection (with or without some divine intervention), clearly dogs’ presence in our lives is an unbelievable gift.  I know I am grateful every day for the five dogs who share my home.


But is everyone who lives with a dog grateful? Obviously they aren’t. 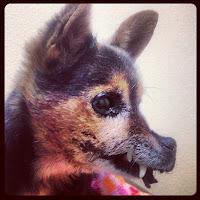 If you read the recent Animals & Society Institute newsletter, or the Harvest Home Facebook page , you read about Handsome Pete, the Chihuahua I brought home from California last week who was found on the side of a rural road by a volunteer with Harvest Home Animal Sanctuary. His face had been smashed in, on at least two occasions, leaving him with a jaw disconnected from the rest of his face, a snout without any bones left in it, and a ruptured eye. The veterinarian who saw him recommended euthanasia because his injuries were so severe. But the volunteers at Harvest Home, after talking to my husband and me, decided to give him a chance at life, and we agreed to give the little guy a home if he survived. A month later, after what the veterinarian herself called a “miraculous” recovery, the dog who we are now calling Handsome Pete is now at his new home in New Mexico, living with his four new Chihuahua companions, and a house full of rabbits, three cats, and a bird who screams at him when he walks by.


How did Pete get to the place in rural Stockton where he was found? Did he get out of his house and hit by a car, and then wander the levee roads for a week or two, injured and in pain, with no one looking for him? Or even worse, did he get beaten, once or maybe twice, and then get abandoned? Or did he get thrown out of a car?


In either of these cases, he appears to be just one of millions of dogs in this country who was unlucky enough to not be appreciated. Maybe he peed on something, or barked at something, or chewed on something, or just didn’t do something right. At my house, he has peed on a couple of things, but he’s quickly learning where to pee and poop, even though he obviously doesn’t like to use the dog door, because his nose is still sensitive. I don’t know if he ever chewed something he wasn’t supposed to, but he will never do that again, because he can’t ever bite down on anything again, since his jaw will never work again. He also hasn’t barked since he’s gotten here. 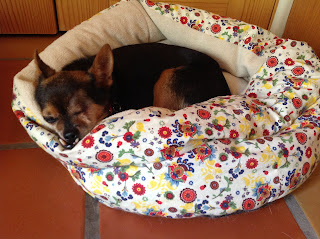 But I do know that in watching the “God Made a Dog” video, Petey meets virtually every criteria that the video maker outlines—he comforts me when I’m sad, he stays up all night to watch TV with me, cuddles with me, and does everything that he possibly can (except maybe sniff out bombs and lead the blind). So why would someone possibly hurt him? And why would people—millions of people every single year, God loving and God fearing people, people who most likely DO believe that God made dogs—hurt and abandon millions of dogs?