How Much is One Life Worth?

One of the differences between animal rights and animal rescue is that animal rights philosophy and activities tend to focus on large numbers of animals, while animal rescue focuses on individual animals. Obviously, for those who care about animal welfare, both focuses are important.


Just focusing on individual rescues does nothing to change the public’s perception about animals or any of the countless ways that humans exploit animals. For long-term change, we must rely on those who work to change the structural conditions that allow for and enable animal exploitation.


At the same time, most people who promote animal welfare or animal rights cannot stand by while individual animals suffer, and many go out of their way to help some of those individuals. The story of animals who have suffered greatly under human control or lack of care often serves to motivate other people to see animals differently, and all of us love stories of animals who survived hardship, and then learned to thrive in a new environment filled with love and care.


But how much time, money, or effort should we spend on individual animals?


I ask this question because I recently played a role in rescuing a small rabbit named Peanut from California. Peanut, a dwarf white rabbit with striking blue eyes and deformed legs, was seen being thrown out of a window near the San Francisco Airport. The person who witnessed this horrific act got out of their car and picked up the bunny, bringing him to Peninsula Humane Society in San Mateo. There, a kind volunteer named Aida, knowing that Peanut would soon be euthanized thanks to the condition of his legs, brought him out of his cage to let him play once in the grass on the shelter grounds. Peanut was slated to be euthanized before his stray period was up. 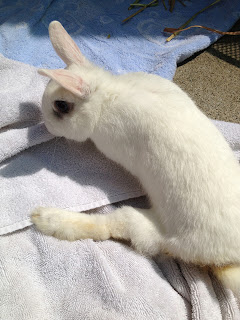 Aida posted Peanut’s picture on her Facebook page, where it caught the attention of Donna, a long-time fosterer for House Rabbit Society, and a friend of mine. Donna knew that I was looking for a disabled rabbit to be a companion to Junior, a rabbit with a severe neurological condition that makes him fall over. Donna emailed me about Peanut, and I told her if she could get him out before he was euthanized, I would take him.


Once Aida pulled Peanut and transferred him to Donna’s care, we needed to find a way to get Peanut from California to New Mexico where I live. Once again, Facebook played a major role. I posted the story of Peanut on the House Rabbit Society and Harvest Home Animal Facebook pages, and thanks to that coverage, dozens of people volunteered to help get Peanut to me. Ultimately, it only took two very generous souls: Kim, who picked Peanut up from Donna’s in South San Francisco and drove him to Santa Barbara where Diane, who was flying to Santa Fe for a conference, would bring him on the plane with her. 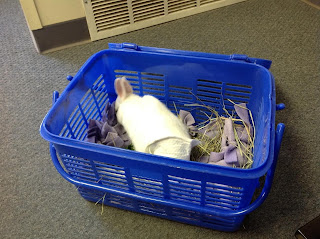 Peanut is now safely living with me, and bonded with Junior even before he was neutered. He’s now been neutered and been given a clean bill of health by my veterinarian, Dr. Levenson, who donated the x-rays of Peanut’s legs and spine.   When he’s not snuggling with Junior, Peanut scoots around my floor in a diaper, which keeps his private parts safe, and interacts with the dogs, the cats, the birds, and the other rabbits in the house. He follows my husband and I around, and spends a lot of time in the kitchen where he quickly learned all snacks come from. 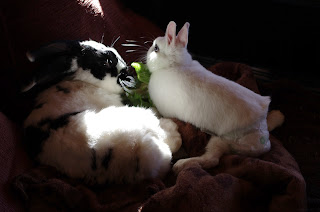 It took a metaphorical village to save Peanut’s life. From the woman who saw him thrown out of the car, to Aida to Donna to Kim to Diane to Dr. Levenson, and to all the people who sent Peanut good wishes and who volunteered to help, his salvation was only thanks to the money, time, and energy of lots of people.


Was it worth it?


Well, clearly, for Peanut it was. He lives a happy life with companionship, good food, freedom to play, and explore, lots of adventures—he took his first camping trip with us last weekend, visiting Bluewater Lake in western New Mexico—and all the love and care that he could ever desire. 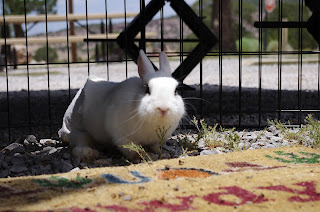 It was also worth it for Junior, who had been left alone back in April when his previous companion, Audrey, died suddenly. Junior can rarely stand up, so his life experiences are very narrow. Having a companion who he can lick, snuggle with, and even lean on, has improved his life dramatically.


It’s also been worth it for me. Even though I live with dozens of animals, having someone who is “special needs” is immensely satisfying for me. Caring for someone who needs me brings me a lot of joy. So having Peanut here has made me very happy.


Ultimately, I feel that every life saved is a life worth saving. While every animal rescuer knows that we cannot “save them all,” there’s just no question that saving even a single life is worth it. 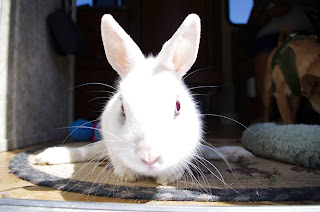