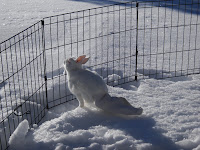 This morning I said goodbye to Audrey. She didn’t say goodbye to me, though, because she was already dead.

Today, and for a very long time to come, I will mourn her death. People who know me know that I have a house full of animals. At this count, 4 dogs, 2 cats, 1 bird, and 34 rabbits. That means that death strikes this house much more often than I would like. On the other hand, and I am not ashamed to admit this, some animals are a much more important part of my life than others, and yes, some animals I love more than I do others. That means that I grieve some more than others. Audrey was one of those animals.

Audrey was a small white rabbit with pink eyes who came to me a little less than a year ago. She was dropped off at an animal shelter with a broken back, and was rescued by a rescue group called Zooh Corner Rabbit Rescue. Zooh arranged for one of their volunteers to drive Audrey to my home in New Mexico.

Since arriving here last year, tiny Audrey has played a huge role in the life of this house. She was a brave, big-hearted, and fierce girl. Afraid of nothing, she explored the house with her custom-made cart, and, when the cart was unusable because she chewed through its harness, she simply crawled everywhere in her little athletic sock which protected her trailing feet and back end.
She loved to tease Igor, one of the living room rabbits, because she knew that he had a crush on her and that it pissed his girlfriend Charlotte off when he spent time with her. She also teased the guest room bunnies, Max and Maggie, because Maggie used to go wild with anger whenever Audrey slipped into her room in her cart. She also loved to go out into the courtyard, where the big group of rabbits plays, and watch them from her side of the rabbit gate.

But what she really loved was to go camping. I’ve written here in the past about bringing Audrey with us on camping trips, where, thanks to the protection of her sock (and a 70 square foot play area created by a set of collapsible ex-pens that we bring) she gets to explore each new campsite. In the past year, Audrey’s been to the desert, the snow, the beach, and even the Rocky Mountains, and relishes each new set of smells, sights, and experiences. Her joy on these trips adds immeasurably to my and my husband’s joy, as we watch her sniffing, eating, meditating, and even binkying in each new place.
I still can’t believe she’s gone. As a writer, my first impulse when someone close to me dies is to write about it. I don’t know how healthy it is, or whether I do so to stave off the intense pain of the grief which I know is coming, but I feel like I need to immediately put into words some of the life of the one who just left. I want everyone to know that she was here, and that her life mattered.
In the case of Audrey, she was so full of life that it seemed at times like that 2 and a half pound body just could not hold it all in. Rabbits don’t normally vocalize, but Audrey did, all the time. She wanted us to know who she was, how she was feeling, and what she wanted.
But now she’s quiet.
I have always told people that Audrey was a star. She had loads of friends on Bunspace, the social networking site for rabbits, and recently we had just signed with a new literary agency; my new agent is pitching a book about Audrey to publishers. I pictured us traveling to the Today Show and having Audrey grunt at Al Roker.

Audrey really was a star, though, even though she’ll never get to be on tv now. She was a shooting star—bright, full of light, and now gone.
Posted by Margo DeMello at 9:48 AM 12 comments: